Older Skylake motherboards like the Z170 are compatible with these motherboards with a BIOS update. Still, if you’re building a new PC, you’ll likely want to go with the newer chipset in order to get the latest technology that both Intel and manufacturers have added on to these boards.

If you’re looking for a good quality board that isn’t too expensive but still allows you to overclock, I like the Asus Prime Z270-A motherboard. This model is not only Asus’ most popular entry into the Z270 market, it’s the most popular Z270 motherboard overall.

I have used the previous generation Z170-A extensively with my Haswell processor and this one has that same value feel to it.

By value, I simply mean that Asus allows you to save money by not adding the features you don’t care about or won’t use, such as SATA Express, but keeping new features like M.2 readily available.

For the Asus Prime Z270-A won’t take you to the world championships for overclocking; however, you should be able to hit around 5.1GHz. That magical 5GHz number is the one that most are looking for with this new series and it’s certainly easy to do here.

Key features here include 2 M.2 drive connectors, 6 SATA ports, and a ton of USB 3.0 and 2.0 headers including both type-A and Type-C connectors so that you’ll have what you need going forward.

Overall, it’s no surprise that the Asus Prime Z270-A maintains its dominance in the space.

It has the polished bios, budget price, quality brand, and allows you to pay for all the features you want while skipping out on those that aren’t important.

A similar board also exists for the AM4 X370 AMD platform. The Prime Z270-A also finds itself on our gaming PC builds list.

There are a lot of new naming schemes with the Z270 lineup, so before we get into this board, it’s important you realize that the Aorus line is what the G1 gaming lineup used to be. 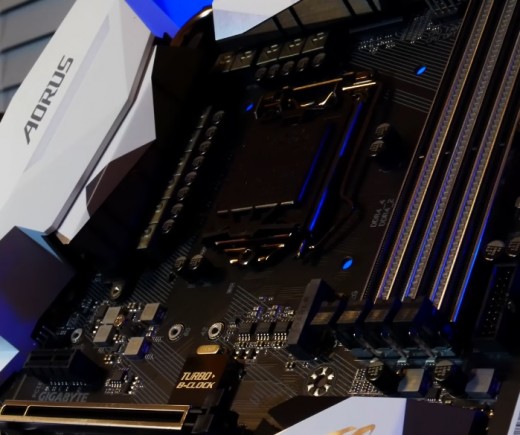 Out of that lineup, the Aorus 9 is the big boy with an extended ATX form factor and enough features to make your head spin.

However, if you prefer that your head stay facing forward and your pocketbook stay in check, you can get the standard ATX Gaming K7 version of this lineup for just under $200 rather than the $500 of the eATX Gaming 9.

For design, Gigabyte’s done an amazing job with their Aorus lineup. The LED lighting, if you care, is top notch. The board itself is also somewhat neutral but does have white accents to it. So, having some additional components or cords with white accents here would take the look to the next level.

Overall this is another fantastic board for under $200. I think most will prefer the K7 vs the 7 version of this board as the additional $50 has features that most won’t use; however, there is certainly a crowd for the Gaming 7 as well.

With a solid list of features, an LED-illuminated design, and a black design the Asus Prime Z270-P is a good budget option for those who would prefer a less bulky looking design but still want to be able to play around a little with their Kaby Lake CPU.

Asus Prime Z270-P Review Even though it’s less expensive, you still get 2xM.2 socket 3 slots. For memory, the board supports up to 64GB of DDR4 3866 (OC). Overclocking along with something like the Hyper 212 EVO should put you in the 5GHz range.

The quality of this Asus board is still very good with features like Japanese audio capacitors and protective features like Asus SafeSlot Core, LANGuard, and Overvoltage protection.

Once behind the walls of a PC case, you’d likely not notice the difference between this under $150 motherboard and a $200 board. I hope you enjoyed learning about the best motherboard for i5 7600k.